Here’s my ten day progress report on fasting from back in Aug 2016.

Here’s a plot of my insulin over the last month or so. I started the 16/8 Intermittent Fast (skip breakfast and lunch) about 10 days ago.

My daily insulin levels have gone from around 100 units a day to 55 units a day. All by skipping breakfast and lunch and just eating later (5PM-11PM).

I have had good blood glucose numbers over the same period. Here’s the chart over the last 30 days.

My average blood glucose has stablized and is much lower than the peaks from earlier. My pump lists:

It is worth noting that most of the days earlier my bolus was around 30% of the total and the basal was around 70%. That was because there were days where they were 50-50. But most days were much lower. If the recommendation is 50%-50% then my basal was set too high. Yet I never went low. Something is really broken with this whole ever-increasing insulin model.

Fasting seems like a great reset to the ever-increasing insulin model. I am not sure how fast to drop my basal rates. I am now at 26 Units for the day. I think I will drop the insulin every other day by .25 Units per hour.

Nobody else should do what I am doing just because I am doing it, please. You can see how careful I am being to make sure I don’t go high.

In searching for the solution to Insulin Resistance I ran across the concept of the Intermittent Fast. The guy who’s most prominent in this is Dr. Jason Fung. Here’s Dr Fung’s YouTube channel.

He’s got quite a few videos. One of the better ones is about an half hour long.

The points in the video are:

Great video. Next post I take a look at my own person experience at this.

There are only three things in what we eat; carbohydrates, protein and fat*. Each of the three have a different effect on the glucose level in our blood (Blood Sugar level). The effect is shown in the following graph. 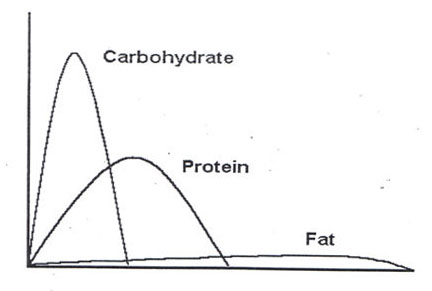 The curve shows why LCHF works for most people. If you reduce eating carbs and replace them with fat you greatly lower your glucose load and your insulin in the process.

I think there’s some useful insight into one Oral Diabetes medication in the following originally from Aug 8, 2016.

From Wikipedia, here’s why Metformin (How Metformin Works) is a good drug for dealing with Insulin Resistance and, for me, worked well for years.

Gluconeogenesis is also a target of therapy for type 2 diabetes, such as the antidiabetic drug, metformin, which inhibits glucose formation and stimulates glucose uptake by cells.

The phrase “stimulates glucose uptake by cells” is equivalent to “helps lower insulin resistance”. From this paper (Hundal RS, Krssak M, Dufour S, et al. Mechanism by which metformin reduces glucose production in type 2 diabetes. Diabetes. 2000;49(12):2063-9), you can see why Metformin works and how it doesn’t quite work well enough in a diabetic person.

So diabetics produced 2x the insulin of non-diabetics (100%) but Metformin only reduced that rate by 24%. Better than nothing but not nearly enough to make the diabetic person “normal”. And insulin resistance is a progressive disease by which the cells get better and better at not unlocking for insulin.

Going on in the paper.

It keeps getting better. A diabetic person is 3x better at gluconeogenesis but Metformin was only able to reduce that so that the diabetic person was at 2x the normal person.

And note, Metformin is about as good as it gets in that category of drug. Looks like it can help, but not solve the issues with gluconeogenesis. Something is better than nothing but don’t get lulled (like I was) into assuming all is well. If we keep filling up those protein stores than the same problem which happened to us with carbs will also happen to us with proteins.

The study concluded that:

Treatment with metformin for 6 months was no better than placebo in terms of improvement in liver histology in patients with NAFLD.

Could it be because the liver is already full and can’t get fatter?

I still thought it was protein in the diet that was the problem with GNG. There’s some dispute in the literature about whether GNG is affected by the fat in the liver or not (Nutrients. 2013 May; 5(5): 1544–1560. Non-Alcoholic Fatty Liver Disease (NAFLD) and Its Connection with Insulin Resistance, Dyslipidemia, Atherosclerosis and Coronary Heart Disease Melania Gaggini, Mariangela Morelli, Emma Buzzigoli, Ralph A. DeFronzo, Elisabetta Bugianesi, and Amalia Gastaldelli).

It looks like the final word may be in this study (Gastroenterology. 2007 Aug;133(2):496-506. Epub 2007 May 1. Relationship between hepatic/visceral fat and hepatic insulin resistance in nondiabetic and type 2 diabetic subjects. Gastaldelli A1, Cusi K, Pettiti M, Hardies J, Miyazaki Y, Berria R, Buzzigoli E, Sironi AM, Cersosimo E, Ferrannini E, Defronzo RA.). The study found that fat in the liver wasn’t the source of GNG, but visceral fat tissue.

Protein doesn’t turn to chocolate cake. Your Dawn Syndrome isn’t from the chicken you had last night. It’s from the cookies you ate three years ago.

I’ve spend time thinking about Gluconeogenesis (GNG). That’s the process where the liver creates glucose from other substrates, including Protein. Earlier on I though Protein was the culprit and was limiting my Protein intake. I don’t believe that was the problem. I believe that the problem was that my liver was overproducing glucose because it was overly fat.

And it turns out that the liver of a diabetic is particularly good at gluconeogensis. From this paper (Diabetes. 2000 Dec; 49(12): 2063–2069. Mechanism by Which Metformin Reduces Glucose Production in Type 2 Diabetes. Ripudaman S. Hundal, Martin Krssak, Sylvie Dufour, Didier Laurent, Vincent Lebon, Visvanathan Chandramouli, Silvio E. Inzucchi, William C. Schumann, Kitt F. Petersen, Bernard R. Landau, and Gerald I. Shulman) GNG is shown to be around 2x as good as a non-diabetic.

And later in the paper:

Want to spend a very confusing day? Watch a bunch of TED talks on the T2D subject by different speakers.

The last one is the best (IMO) of all of the talks.

Her key points are:

Practically this means eating food from the outside ring of the supermarket. Nothing out of the middle rows. No pasta, no cereal, nothing made of wheat, none of the processed foods in the middle. Outside ring is vegetables, meat, dairy, eggs. Maybe 15% of the stuff in the store.

Studies on Fasting will be listed here.

Here are Studies specifically on the effects of diets on Diabetes (particularly low carbohydrate diets).

These are studies related to diabetes in general:

Studies on Protein and Diabetes

Protein as a Macronutrient and Protein Requirements