I’ve got a long but spotty history with Low Carbohydrate diets over a couple of decades.

I was a fairly thin kid although I thought of myself as fat. I remember weighing 160 when I was a HS sophomore. I went on a diet and lost weight down to 128. Everyone told me I looked great, but at 5’10” that was way too light. That was my first experience with dieting. Of course, I regained the weight over the next few years.

When I graduated college in the early 1980’s, I was about 208 lbs. When I got married a year later I was a lighter 185 lbs. Within a year I had gained all of the weight back and was even heavier at about 235 lbs.

I gained more weight in the mid 1990’s – getting up to around 260 lbs from eating a lot of pizza and working a lot of long hours. A work friend, Chris, also was putting on weight from the same work schedule and diet. Chris told me about this crazy diet that he had tried in the past which helped him lose weight pretty quickly. The diet was by a guy named Atkins and for the diet you eat eggs and bacon but not toast.

Chris lent me a copy of Atkins book, The Diet Revolution which had come out in 1981. We both started the diet together and I went from about 260 lbs down to around 225 lbs without any real effort. I followed the Atkins protocol which was a 20 grams of carbohydrates induction phase (2 weeks long) and maintenance at less than 50 grams of carbs a day.

I did the diet for about a year and a half until I started having irregular heartbeats so I stopped the diet (I didn’t know anything about electrolytes which I now know was the issue with irregular hearbeats).

Pre-Diabetic in my late 30’s

By the middle of the 1990s I had gained weight up to around 260 lbs. My MD suspected I was a diabetic due to a high fasting blood glucose. He ordered a Glucose Tolerance Test (GTT). The results came back that I was not a diabetic but one day the Physician’s Assistant (PA) in the office took one look at me and said I was Diabetic. The doctor argued with her from the charts that I wasn’t – after all I had just passed the GTT.

The PA recognized the symptoms (High Blood Pressure, weight in my middle, Etc.) of Metabolic Syndrome. I think it was because she was younger and freshly out of school and my MD was an older guy. In hindsight, she was right. I was definitely on my way to diabetes.

The doctor sent me to a dietician who trained me to eat the standard diabetic’s diet which contains a lot of carbohydrates (at least 20 grams at each meal). Fortunately, I remembered from reading Atkins that some people had success in dealing with their diabetes using Low Carb diet. I did some lower carbs (but not Atkins induction levels) for the next few years and kept passing the tests for not being a diabetic -although now I realize I wasn’t really getting too much better.

Into My Fourties – Symptoms of Diabetes

Fast forward to early 2000’s. I lost weight from the 280’s down to the 230s – a loss of around 50 lbs without any effort. I was drinking a lot of water and going to the bathroom four or five times a night. I didn’t know that I had tipped over from being pre-diabetic to full blown diabetic.

Around that time I took on a summer job as a hospital chaplain and over the course of a summer started drinking sodas at lunch which I now know added a large amount of sugar to my diet. I felt like it was OK since nothing I could do would put any weight on me. For some reason I was no longer gaining weight and I could eat pretty much as I wanted. Atkins went out the window although I had only partly been doing Atkins.

I got a call from my new MD who seemed very worried about my latest blood test. He told me that my HbA1C number (the test of my blood sugar in the past three months) indicated I was a diabetic. The number was 12.6 which says my Blood Sugar had been around 300+ for the past few months. A normal number is 4.8 to 5.2. All of a sudden my thirst and bathroom use made sense.

The doctor started me on Metformin and my blood sugars quickly came under control. My HbA1C reached “normal” range for a diabetic (between 6.0 and 7.0).

Over the course of the next few years the “honeymoon period” came to an end and my prescription strength needed to be increased. Around 2007, I went in for a routine blood work and my HbA1C number was 10.4. Doctor put me on Byetta (shots), took me off Metaglip, and put me on Metformin. I always tolerated the Metformin pretty well with minimal side effects. I also took Avandia which has now been shown to cause other damages and have been restricted. 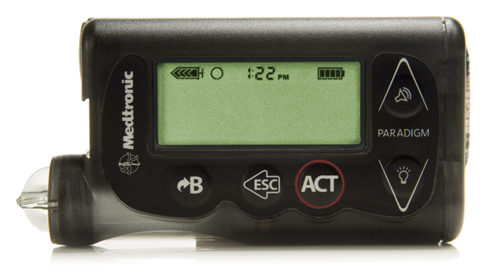 The pump is connected by a hose to a cannula which inserts into the body (not an actual picture of me).

My initial Insulin dosage was around 40 units a day. But the honeymoon period ended and my dosage started creeping up. It’s so easy with the pump to change the basal (background amount that is pumped constantly) and the bolus (amount that gets pumped in response to carbohydrates in a meal).

After about 5 and a half years of pumping my Insulin amount was over 100 units a day and rising. I knew I needed to do something to solve this.

Low Carb While On Insulin

I remembered Atkins and the Low Carb diet. I tried it for a three month period and got my HbA1C down to 6.4 – the lowest it had been since starting the diabetic meds years earlier. Low Carb also got my weight down 15 lbs.

My doctor said he wanted to frame my results. He had never seen numbers like that before. I was eating at low (Atkins Induction phase) sort of numbers and was getting good results. Over the next year or two I slipped out of Low Carb and my numbers (weight and blood sugar) started to creep up.

I only averaged 200 grams of carbs yet I was still an Insulin dependent diabetic (around day 40 I started the change to low carb).

A couple of years ago I got convinced I wanted to travel to China and maybe even more there to teach but they have restrictions on health of teachers and I knew that I would need to get off Insulin if I wanted to make a change like that.

I took at week off work to research solving my diabetes. I remembered that the symptoms I had were known as Syndrome X. This has since been renamed as Metabolic Syndrome and consists of a cluster of medical symptoms. It is also known by or related to Insulin Resistance.

So I did what I couldn’t have done before the dawn of the Internet. I googled Metabolic Syndrome and started watching YouTube videos. I found a video by a kidney doctor in Canada, Dr. Jason Fung. He claimed to have cured thousands of patients from Type 2 Diabetes using Intermittent Fasting and Low Carbohydrate diets.

Here’s the first video I watched:

So I decided to give it a try. I knew Very Low Carb was Atkins induction phase so I dropped my daily carbs to less than 20 grams.

At the same time I also followed the other part of Dr Fung’s protocol. I switched from eating my regular breakfast (two McDonald’s breakfast egg/cheese burritos) to only eating at lunchtime.

The combination of the Very Low Carb (VLC) diet and Intermittent Fasting (IF) was the one-two punch to my diabetes.  My blood sugar numbers dropped quickly. The left side shows the irregularity of my blood sugars (poor control despite consistent monitoring and pumping) and the right shows a much more stable and low average around 100.

Since I wasn’t eating any carbs I didn’t need to pump for the bolus numbers. That took my Insulin consumption from 100 units a day down to 50 units a day immediately. Over the course of the next two weeks I was able to safely drop my basal amount from 50 units down to zero units. I was then completely off Insulin.

Here’s the chart showing how I reduced my Insulin to zero.

My Weight Started to Drop Quickly

When I was started on Insulin I was 245 lbs but had gained 40 lbs over the next few years on Insulin. I wasn’t eating more food, but I was packing on weight. I reached a point where my weight stabilized around 285 lbs but my blood test results kept getting worse.

My weight then started to drop quickly. The forty pounds I had gained while on Insulin dropped off over the next six weeks or so. I wasn’t being careful about what I ate but I was losing a lot of weight.

I waited a full year before going back to my doctor in July 2017. My weight had dropped by more than 50 lbs and my HbA1C had gone down to 5.8 which classified me at the bottom end of pre-diabetic.

My doctor didn’t know what to make of what had happened. At first he said I must have been misdiagnosed and the proper diagnosis must have been pancreatitis. I reminded him that I was a diabetic for more than a dozen years and he said it couldn’t be pancreatitis.

I asked if he wanted me to tell him what I did and he started to listen. I told him that when he gave me the pump I was instructed that if I didn’t eat any carbohydrates I wouldn’t need to bolus. I told him that as I went longer without adding bolus my background levels dropped and I was able to get off the pump in 2 weeks.

I’ve since had another HbA1C test and my number was 5.2 which is in the center of non-diabetic (4.8 to 5.6). I am no longer a diabetic. If I eat carbs again, I won’t become a diabetic in a day, but I’m sure if I eat too many carbs I will become one again.

This BLOG is here to let others learn what I have learned. See the disclaimer below. Realize that your doctor doesn’t know everything. He or she has little training in nutrition and may have outdated information.

I am convinced after looking at the science for the past 18 months that it leads to Intermittent Fasting and Very Low Carb diets as the solution for Type 2 Diabetes.

This hack works for most Type 2 diabetics but there could be someone out there who it doesn’t work for. If you are a diabetic don’t just stop your medications — it could kill you. Monitor your blood sugar and make the adjustments  as prescribed by your doctor when your blood sugar levels drop.